In February 1951, the unit was reactivated at Mildenhall, England as the 32d Anti-Aircraft Brigade to defend U.S. Air Force bases from air attack. In June 1957, the brigade deployed from England to Kaiserslautern, Federal Republic of Germany. The following year it was re-designated Headquarters and Headquarters Battery, 32d Artillery Brigade. The unit was initially equipped with 75mm and 90mm anti-aircraft guns but acquired the Nike Hercules Missile System in 1960 and the Hawk Missile System in 1961. In May 1961, the 32d was re-designated as the 32d Army Air Defense Command. Subordinate to the 32d AADCOM were the 10th, 69th, 94th and 108th ADA brigades, making it the largest air defense unit in the U.S. Army. As part of USAREUR and Seventh U.S. Army, it maintained a constant watch over West Germany in support of NATO. In November 1975, Headquarters Battery, 32d AADCOM moved from Kapaun Barracks in Kaiserslautern to Cambrai-Fritsch Kaserne in Darmstadt, Germany. In 1985, the Army formulated the Air-Land Battle Doctrine to prepare for what seemed to be and inevitable clash with the Warsaw Pact forces. At that time, the 32d AADCOM Commander, MG Victor J. Hugo, stated "The end result of all these doctrinal and hardware improvements (Patriot and Hawk modifications), will be a Theater Army Air Defense Command that is leaner, prouder, more skilled and more capable to face the threat of 1990 and beyond." The 32d AADCOM's Cold War mission culminated with the fall of the Berlin Wall and the unit was inactivated on March 21, 1995 in Darmstadt, Germany. In August 1996, to meet the growing theater ballistic missile threat, the Chief of Staff of the Army directed the activation of a provisional command that became the foundation of the Army Air and Missile Defense Command and directed the AAMDC to forego the normal force development process and activate as a multi-component unit with both Regular Army and Army National Guard Soldiers. The provisional AAMDC was deployed on short notice to Southwest Asia in February 1998, in support of Operation Southern Watch/Desert Thunder.

Germany, honored all of those soldiers

who so faithfully served 32nd

As the final commander of 32nd

AADCOM, I have mixed feelings as

the inactivation process evolves. My

pragmatic side realizes the Cold War

has been won and that the inactivation

of this headquarters signifies a victory

for all Americans. However, it was

with a great deal of emotion that we

formally marked the inactivation of the

unit during the Honors Ceremony. The

primary reason the ceremony was so

poignant was that a significant piece of

our branch - a piece of American mili-

tary history -was being retired. From

during the Cold War into a command

that represented the first line of defense

forNATO in the event ofan air attack by

the Warsaw Pact forces, and since the

fall of communism, evolved into a unit

that has prepared itself for any possible

sented the U.S. Army's only theater-

The 32nd AADCOM was activated

for service in World War I, when it was

created as the 32nd Artillery Brigade,

has come a long way from those humble

beginnings to demonstrate its flex-

ibility in updating both weapon sys-

tems and tactics. The command mis-

sion expanded to include the mission

to defeat all types of airborne targets.

At the same time, 32nd AADCOM

grew from an element of NATO's "de-

In August 1956 Seventh Army was instructed to prepare a sound, flexible operational plan for the six NIKE battalions to be received in FY 1958, based on the assumption that the tentatively selected sites would be approved. Individual plans were to be prepared for each defended area, integrating both NIKE and conventional antiaircraft artillery units.

During the Cold War period, the 94th Artillery Group defended NATO with Nike Hercules, HAWK, PATRIOT, Chaparral and Vulcan Air Defense Systems inspiring the motto of ?First Line of Defense.?  After the collapse of communism in Europe, the 94th Air Defense Artillery Brigade continued to support European Command contingencies throughout the European Command Area of Operations.

The 5/1 Artillery (N-H) BOC probably was collocated with the IFC closest to HHB -- A/5/1 near Wackernheim. Later named 2 1 ADA 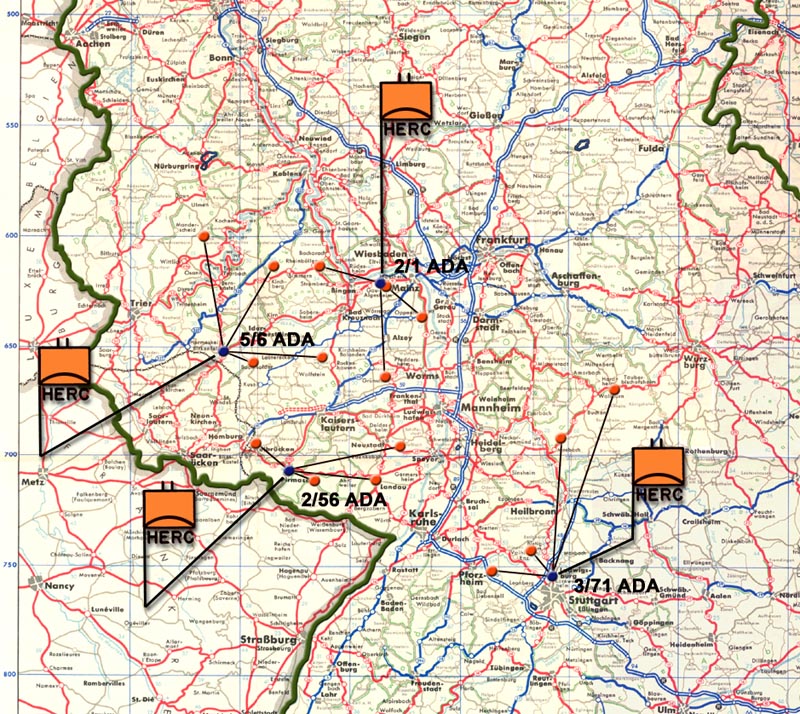 The Missing Bullet
by Kenneth Gary Crotty over a year ago

D21 Memory
by Michael McLemore over a year ago

anyone remember
by Michael McLemore over a year ago
More...